How companies reward their most loyal employees

After working 25 years for the same company, many employees are faced with a difficult choice: a juicer or a cotton candy maker. Such are tokens of loyalty many firms offer their longest-serving employees.

At a time when workers change jobs as often as they change light bulbs, and employers are searching for new and better ways to retain their best workers, some consultants marvel at the persistence of a seemingly ancient initiative: tenure reward programs. Employers spend about $46 billion a year, or roughly 1% of payroll on various employee-recognition programs, according to the Incentive Marketing Association, a trade group for firms that help build incentive programs. A 2012 report from Bersin & Associates found that the bulk of those funds, or 87%, are spent on programs that reward employee tenure.

Most of the time, employees are given the chance to choose from a catalog of gifts when they reach significant anniversaries with their company—say, a knife set for reaching the five-year mark, or a 48-bottle wine cooler on their 25th anniversary. Acknowledging that a person’s fifth year anniversary at one company could be their 20th year working overall, some firms are adding a bigger range of gifts. Electronics and home appliances are popular choices but not all gifts are quite so practical. “An item that might raise an eyebrow for one person - such as an adjustable slimming belt - could be seen as the perfect reward for someone with a doughnut addiction,” says Susan Adams, the director of engagement at Dittman Incentive Marketing, a firm that helps employers develop employee-award programs. “There is something to suit everyone’s taste.”

Many employers outsource the process to a third-party company that make it possible for workers to order their gifts online. Often, employees sifting through the merchandise won’t see a dollar value attached to each item, but companies commonly budget to spend $25 for each year of service, says Jeffrey Fina, chief business development officer for Michael C. Fina, a leading provider of employee recognition programs. So someone celebrating five years at the firm could expect to get a gift worth roughly $125, he says. 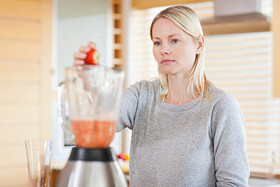 These programs are ineffective, some experts say, partly because many employees aren’t even aware the programs exist. The programs may be doing little to encourage people to worker harder or to stick with the company longer. Indeed, while nearly 75% of companies said they have a recognition program, only 58% of employees knew about them, according to the Bersin report. “Doing this type of program doesn’t result in any significant benefit for the company,” says Stacia Sherman Garr, a lead analyst for Bersin.

Given that workers typically change employers every 4.6 years, according the U.S. Department of Labor, few are likely to stick around for the gift of a blender or autographed baseball. For employees ages 65 and up, median tenure at a company was 10.3 years in 2012, three times the tenure for workers ages 25 to 34.

And even if a person wanted to stay with their employer for 20 or 30 years, they might find their ambitions of loyalty outlast their company’s fortunes. The average company stays in the S&P 500 stock index for 15 years, down from about 67 years in the 1920s, says Richard Foster, a lecturer with the Yale School of Management and former senior partner at McKinsey & Co. Those exits from the S&P are often more due to companies being acquired or spun off than they are to companies shutting down, says Foster, but such organizational shifts are often accompanied by changes in branding, structure and focus. “Anybody who thinks they’re going to stay with a company 30 or 40 years better go back and change their assumptions,” says Foster. “These days, workers should expect to have to change jobs four or five different times.”

Still, the gifted coffee makers and bicycles are unlikely to go away anytime soon. For starters, even if it isn’t clear that the programs do anything to boost engagement or performance, not having them could hurt a company’s retention and recruitment efforts, experts say. “It’s very emotional to the employee,” says Fina. “It’s like their birthday, and if you miss it, they get pretty upset.” Some companies are responding to shorter tenures by offering rewards earlier and introducing a greater range of gifts, he adds.

And the programs, when paired with other measures, can help boost morale and performance, he says. Some companies find the gifts can have more of an impact when they are paired with regular employee feedback, when they’re easy to redeem, and when a company sets clear criteria on what workers must to do to earn the rewards, says Garr. For instance, employees might get gifts for helping the company meet organizational goals, like boosting revenue, or for participating in special projects outside of their main responsibilities. Companies that had those additional elements had 31% lower voluntary turnover than companies with ineffective programs, according to the Bersin report.

The tax man also has a hand in the current reward programs. Unlike with cash awards or gift cards, when companies give tangible gifts to reward performance or longevity, employees can generally receive them tax-free. Length-of-service awards can generally be given only every five years. And there’s a reason the gifts—even for 50-year veterans—can be only so extravagant: The total value of gifts workers can receive tax-free each year, for performance or longevity, is capped at $1,600. (Anything above that must be reported as income.)

Another factor is cost. Some companies feel tangible gifts can have a bigger emotional impact than a gift card, and may feel like they have to spend more when they’re giving cash in order for it to have the same effect, says Adams. Indeed, 54% of companies surveyed by the Incentive Research Foundation, a non-profit organization that studies the use of incentives, said they gave employees merchandise as part of their recognition programs. Thirty percent said they gave workers cash.